Fragment-based ligand discovery (FBLD) has been widely used to identify selective small organic molecules that inhibit protein activity, either inhibiting the catalytic action or disrupting a protein-protein interaction. However, there has been very little reported on the use of FBLD to identify activators of enzyme activity.

The phenomenon of activation is well established for receptors. There are relatively few examples of naturally occurring small molecules that activate enzymes.The York laboratory has recently demonstrated that small fragments can increase the activity of the glycoside hydrolase, BtGH84 [1] which were subsequently engineered to bind covalently to the enzyme and give further increased activity [2].

In this project we are using fragment methods to identify fragments that activate industrial glycoside hydrolases, a class of enzymes used industrially in cellulose degradation. Low activity has been considered as one of the main limiting steps in the process. 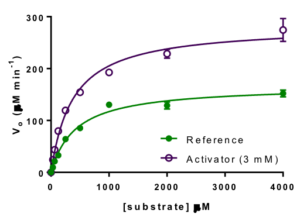 A fragment screen of a library of 560 commercially available fragments using a kinetic assay identified a small molecule activator of the fungus glycoside hydrolase (TrBgl2) (Figure 1). An analogue by catalogue approach was used to identify improved compounds which result in approximately up to 2-fold increase in maximum activation and behave as nonessential activators increasing the Vmax(Vmax= maximum rate of reaction) and decreasing the KMvalue. The activators showed no activation of the related bacterial glycoside hydrolase CcBglA demonstrating that the effect is specific.

Interestingly, a fragment analogue of the initial hit appears to inhibit both TrBgl2 and CcBglA through a mixed-model mechanism.

The actual mechanism of activation is being investigated and will suggest where to covalently tether the activator to constitutively activate the enzyme.